Our overall goal is to reduce the number of crashes and the severity of the crashes that do occur. Managing speed is crucial to this because the outcome of all crashes is strongly influenced by the impact speed. 'The Speed that thrills is usually the speed that Kills'. Speed Management reviews are presently taking place all around New Zealand.

What is the problem?

Between 2016 – 2020  47 people died (40 fatal crashes), 219 were seriously injured (166 serious injury crashes) in crashes where inappropriate speed was a contributing factor.

An increase in average speed of 1 km/h typically results in a 3% higher risk of a crash involving injury, with a 4–5% increase for crashes that result in fatalities.

Speed also contributes to the severity of the impact when a collision does occur. For car occupants in a crash with an impact speed of 80 km/h, the likelihood of death is 20 times what it would have been at an impact speed of 30 km/h.

Setting and enforcing speed limits are two of the most effective measures in reducing road traffic injuries.

Studies suggest that a 1 km/h decrease in travelling speed would lead to a 2–3% reduction in road crashes.

What are we doing about it?

On-going Speed Management Reviews on both State Highway and Local roads. Improving roads and roadsides will encourage people to travel at speeds that are appropriate and safe for the conditions. Improving basic features such as road markings and signage will help road users to identify and understand the speed limit. The speed that is safe on a road under particular conditions (e.g. wet weather) should be obvious to the road user, but this is often not the case. Many drivers don’t understand that on most journeys their average speed travelled is much lower than posted speed limits. This is influenced by congested roads, road works, weather & road conditions.

The pure math tells us if you travelled  –

100 kilometres at an uninterrupted 100kms per hour it would take you 1 hour.

As we know when considering the above variables the journey time will be a little longer but easing off the accelerator the roads will be safer, you’ll be less fatigued, more refreshed. Always plan your trips & journey times.

In the Road to Zero Action Plan 2020-2022  Focus Area 1 Infrastructure improvements and speed management highlights the key strategic direction by the Government and partners.

Improve road safety in our cities and regions through infrastructure improvements and speed management: Initial actions –

Remember –  ‘The Speed that thrills is usually the speed that Kills’. 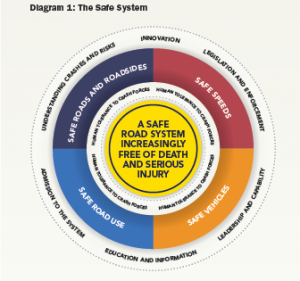 Check out this ‘physics of speed’ educational game from the Western Australian Governments ‘Road Safety Commission’.